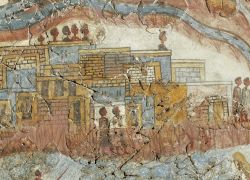 Akrotiri, the remains or a prehistoric city that was buried under the ash and pumice stone after a very strong volcanic eruption on 1600 b.c

Akrotiri not only remained buried for almost 4000 years but at the same time it remained protected and preserved under a very thick layer of volcanic material, that’s why everything there is still standing in an almost perfect condition.

The archeologists have revealed part of that city, with some really large building complexes, with remains of kitchen and toilet facilities and a perfect drainage system. Then they found a big variety of pottery and some very well preserved wall paintings, everything in an almost perfect condition.