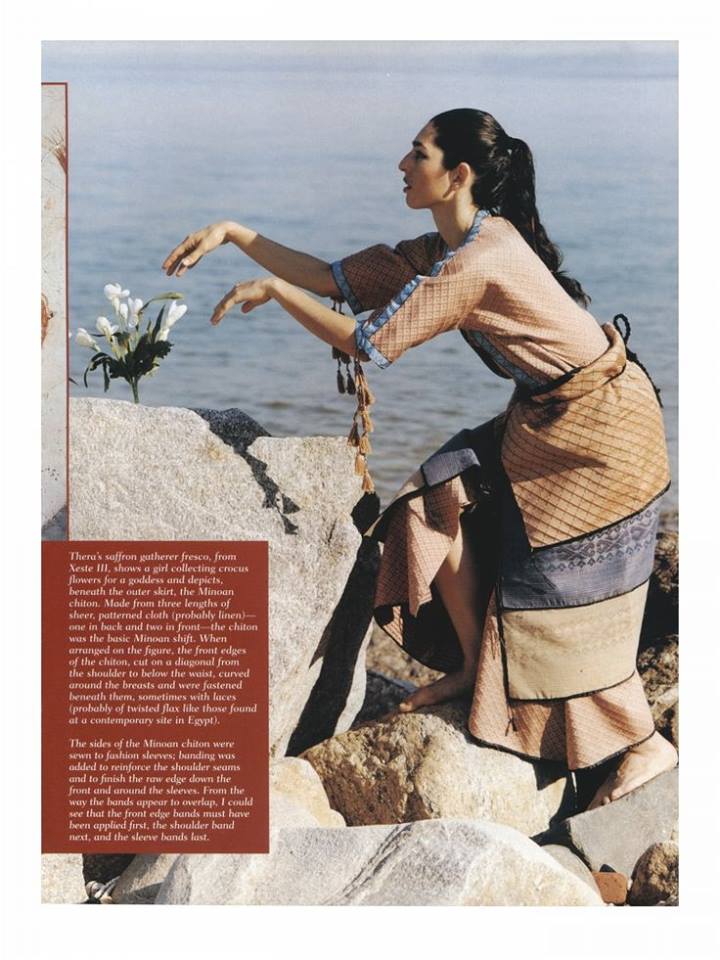 GREEK HISTORY AND PREHISTORY. THE GREEK SOCIETY AND ART IN PREHISTORIC MEDITERRANEAN

The Minoans were primarily mercantile people engaged in overseas trade. Their culture, from 1700 BCE onward, shows a high degree of organization. The Minoan trade in saffron, the stigma of a mutated crocus which originated in the Aegean basin as a natural chromosome mutation, has left less material remains: a fresco of saffron-gatherers at Santorini is well known. This inherited trade pre-dated Minoan civilization: a sense of its rewards may be gained by comparing its value to frankincense, or later, to pepper. Archaeologists tend to emphasize the more durable items of trade: ceramics, copper, and tin, and dramatic luxury finds of gold and silver.

The Minoan culture was centered on the island of Crete, but extended to other nearby islands, including Thera and Rhodes. They may have colonized the Anatolian coast at Miletus and elsewhere. Through the extension of trade, they influenced the developing Greek culture on the mainland and other Aegean islands.

Objects of Minoan manufacture suggest there was a network of trade with mainland Greece (notably Mycenae), Cyprus, Syria, Anatolia, Egypt, Mesopotamia, and westward as far as the coast of Spain. Minoan men wore loincloths and kilts. Women wore robes that had short sleeves and layered flounced skirts. The robes were open to the navel, allowing their breasts to be left exposed. Women also had the option of wearing a strapless fitted bodice. The patterns on clothes emphasized symmetrical geometric designs. Given the fragility of organic materials, other forms of dress may have been worn off which no archeological evidence exists.

The Minoan religion focused on female deities, with females officiating. The frescos include many depictions of people, with the genders distinguished by color: the men’s skin is reddish-brown, the women’s white. The greatest collection of Minoan art is in the museum at Heraklion, near Knossos on the north shore of Crete. Minoan art, with other remains of material culture, especially the sequence of ceramic styles, has been used by archaeologists to define the three phases of Minoan culture (EM, MM, LM) discussed above.

Since wood and textiles have vanished through decomposition, the best-preserved, and so most easily learned from, surviving examples of Minoan art are its pottery, the palace architecture with frescos that include landscapes, stone carvings, and intricately carved seal stones. Frescoes were the main form of art during these times of the Minoan culture. The Minoan civilization was an Aegean Bronze Age civilization that arose on the island of Crete and other Aegean islands and flourished from approximately 3650 to 1400 BCE. It belongs to a period of Greek history preceding both the Mycenaean civilization and Ancient Greece. It was rediscovered at the beginning of the 20th century through the work of British archaeologist Arthur Evans. Historian Will Durant dubbed the Minoans “the first link in the European chain,” and their civilization has been referred to as the earliest of its kind in Europe. The term “Minoan” refers to the mythic King Minos and was originally given as a description of the pottery of this period.

Minos was associated in Greek myth with the labyrinth and the Minotaur, which Evans identified with the site at Knossos, the largest Minoan site. The poet Homer recorded a tradition that Crete once had in 90 cities. The Minoan period saw significant contacts between Crete, the Aegean, and the Mediterranean, particularly the Near East.

As traders and artists, their cultural influence reached far beyond the island of Crete—throughout the Cyclades, to Egypt’s Old Kingdom, to copper-bearing Cyprus, Canaan, and the Levantine coasts beyond, and Anatolia. Some of its best art is preserved in the city of Akrotiri, on the island of Santorini, destroyed during the Thera eruption.

The Minoan language and writing system (Linear A) remain undeciphered and a matter of academic dispute, but seemingly convey a language entirely different from the Greek dialects in later periods.

The causes of the changes to bring about the end of the Minoan period (around 1,400 BCE) are unclear, though theories include an invasion from the mainland or the volcanic eruption of Thera. The influence of the Minoan civilization outside Crete has been seen in the evidence of valuable Minoan handicraft items on the Greek mainland. The shaft graves of Mycenae show several Cretan imports, such as a bull’s head rhyton, which suggests a prominent role for the symbolism of Minoan Crete in the ideology of rule there. After around 1700 BCE, the material culture on the Greek mainland achieved a new level due to Minoan influence. Connections between Egypt and Crete are prominent. Minoan ceramics are found in Egyptian cities and the Minoans imported several items from Egypt, especially papyrus, as well as architectural and artistic ideas.

The Egyptian hieroglyphs served as a model for the Minoan pictographic writing, from which the famous Linear A and Linear B writing systems later developed. Bengtson has also demonstrated Minoan influence among Canaanite artifacts. Around 1450 BCE, Minoan culture experienced a turning point due to a natural catastrophe, possibly an earthquake. Another eruption of the Thera volcano has been linked to this downfall, but its dating and implications remain controversial. Several important palaces in locations such as Mallia, Tylissos, Phaistos, Hagia Triada as well as the living quarters of Knossos were destroyed. The palace in Knossos seems to have remained largely intact. This resulted in the Dynasty in Knossos being able to spread its influence over large parts of Crete, until it was overrun by Mycenaean Greeks. Minoans were traders, and their cultural contacts reached far beyond the island of Crete—to Egypt’s Old Kingdom, to copper-bearing Cyprus, Canaan, and the Levantine coasts beyond, and Anatolia. In late 2009, Minoan-style frescoes and other Minoan-style artifacts were discovered during excavations of the Canaanite palace at Tel Kabri, Israel, leading archaeologists to conclude that the Minoan influence was the strongest foreign influence on that Canaanite city-state.

These are the only Minoan remains ever found in Israel. Minoan cultural influence indicates an orbit that extended not only throughout the Cyclades (so-called Minoanisation) but in locations such as Egypt and Cyprus. Paintings from the 15th century BCE in Thebes, Egypt depict several individuals, who are Minoan in appearance, bearing gifts. Inscriptions record these people as coming from Keftiu, or the “islands amid the sea”, and may refer to gift-bringing merchants or officials from Crete.